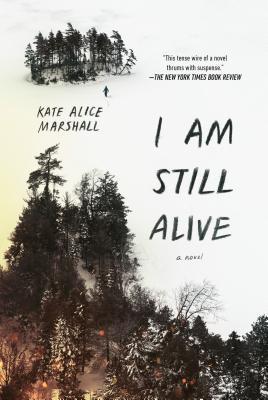 I Am Still Alive by Kate Alice Marshall

Cheryl Strayed’s Wild meets The Revenant in this heart-pounding story of survival and revenge in the unforgiving wilderness.

After: Jess is alone. Her cabin has burned to the ground. She knows if she doesn’t act fast, the cold will kill her before she has time to worry about food. But she is still alive–for now.

Before: Jess hadn’t seen her survivalist, off-the-grid dad in over a decade. But after a car crash killed her mother and left her injured, she was forced to move to his cabin in the remote Canadian wilderness. Just as Jess was beginning to get to know him, a secret from his past paid them a visit, leaving her father dead and Jess stranded.

After: With only her father’s dog for company, Jess must forage and hunt for food, build shelter, and keep herself warm. Some days it feels like the wild is out to destroy her, but she’s stronger than she ever imagined.

Jess will survive. She has to. She knows who killed her father…and she wants revenge.

Prior to seeing this book on a shelf at work, it hadn’t been on my radar. I was drawn to the cover, a grabbed it because of the title and blurb, “This tense wire of a novel thrums with suspense.” Before reading, I did skim the synopsis, which once again piqued my interest.

The opening chapter immediately tells you what will happen in the end. Broken into periods of Before and After, the main character Jess tells her story of how she reached that point in her life. While shifting timelines isn’t something new in the YA genre, I found it to be very effective in this kind of story. It’s easy to imagine a character in Jess’ situation to have jumbled memories, and untangling them along with her during her survival created an intense and emotional depiction of her life.

While there are side characters in the book, the story mainly revolves around Jess and her wilderness companion, her father’s dog named Bo. I enjoyed how the book was able to capture my attention with only really two main characters. There’s a lot of internal dialogue and explanatory story as a result of this. But, it made the scenario more vivid and real to me.

Survival was one of my favorite aspects of the book. There was nature, strategy, adventure, action, and suspense. It was a girl (+ dog) vs the wild. Yet, there was another aspect of the story that I felt fell short – the mystery surrounding the death of Jess’ father.

While this event was the catalyst for the story, I wasn’t satisfied with the amount of information we got about it. For an event that shaped this girl’s experience, I still can’t tell you much detail about it. Now, I understand that the book is being told from Jess’ perspective, so this could prove difficult. But, the ending could have done a bit more to provide some closure to important story events and side characters.

One other thing about this book to note – there’s no romance! Not a smidge! Romance is normally a part of YA that I tend to miss if it’s not there, but really it wasn’t needed here and I’m glad nothing was forced. The story holds its own and focuses on self, family, friend, and canine relationships, which I appreciated.

Overall, I Am Still Alive was an entertaining survivalist story that kept me hooked from beginning to end but left me wishing for a bit more closure.