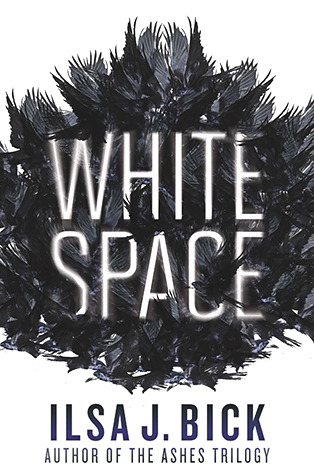 In the tradition of Memento and Inception comes a thrilling and scary young adult novel about blurred reality where characters in a story find that a deadly and horrifying world exists in the space between the written lines.

Seventeen-year-old Emma Lindsay has problems: a head full of metal, no parents, a crazy artist for a guardian whom a stroke has turned into a vegetable, and all those times when she blinks away, dropping into other lives so ghostly and surreal it’s as if the story of her life bleeds into theirs. But one thing Emma has never doubted is that she’s real.

Then she writes “White Space,” a story about these kids stranded in a spooky house during a blizzard.

Unfortunately, “White Space” turns out to be a dead ringer for part of an unfinished novel by a long-dead writer. The manuscript, which she’s never seen, is a loopy Matrix meets Inkheart story in which characters fall out of different books and jump off the page. Thing is, when Emma blinks, she might be doing the same and, before long, she’s dropped into the very story she thought she’d written. Trapped in a weird, snow-choked valley, Emma meets other kids with dark secrets and strange abilities: Eric, Casey, Bode, Rima, and a very special little girl, Lizzie. What they discover is that they—and Emma—may be nothing more than characters written into being from an alternative universe for a very specific purpose.

Now what they must uncover is why they’ve been brought to this place—a world between the lines where parallel realities are created and destroyed and nightmares are written—before someone pens their end.

Special thanks to the publisher and Edelweiss for providing me with an advance copy of the book for review!

The idea for this story was what really interested me. I loved the concept of the book. It was something totally different than anything that I’ve ever read before, and I really liked that. The book made me think and got my imagination going wild! The one bad thing I have to say about the plot is that there was always a lot going on, often times making the book confusing and a bit hard to follow.

The book is written in alternating POVs of all of the main characters. It goes back and forth, which in most books is fine, but for this one because of the amount of things that were happening I got a little confused. The chapters would many times end at a cliff-hanger and then the next would pick up from a different POV, keeping you reading to find out what happens.

The book definitely didn’t lack in the action or suspense departments. There was always something happening. Almost to the point where it was a little too fast for the amount of information being given to the reader. With that being said, I was kept on the edge of my seat.

The setting, or settings, were some of my favorite parts of the book. It was always changing to different “book worlds”. Kind of hard to explain as it was very complex, but I really liked them. It was really cool.

There are lots of characters, but all of them were very individual and easy to tell apart. I liked the way all of them interacted, and the lead character Emma was my favorite. The most happens to her, and reading from her perspective was awesome.

Romance wasn’t a big part of the book at all. But, it served as a way to lighten the mood and tone for the book, as it is really overall grim and dark. It was cute, but definitely was on the back-burner which fit for the main storyline.

White Space is a dark, suspense-filled, action-packed thrill ride. It was so unique and different, and it had a killer concept. The main reason for the 3 star rating was that the execution wasn’t the best. Like I previously mentioned, there were many times were I was confused, and it was a little too fast paced for me. But, if you’re up to the challenge to take on this book, you’ll be left saying, “What did I just read?!”.