We had a HUGE thunderstorm in my area mid-week and we lost power TWICE in two days. The first time it was out for 7 hours, then it came back on, and the next day it went off again for another hour. In it’s wake it killed our microwave, fridge, and power strip connected to the desktop computer…so yeah. Coincidentally the power went out during while I was watching a creepy episode of Pretty Little Liars and I kind of freaked out. Has anyone been watching PLL lately? I think the show has been drawn out quite a lot, but Season 5 looks like it’ll be different than the past ones…I’m liking it. 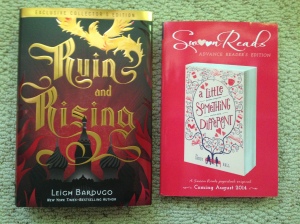 Ruin and Rising (B&N Exclusive Collector’s Edition)  by Leigh Bardugo – This was a must. And the collector’s edition because there’s a short story about the Darkling. Yes please! 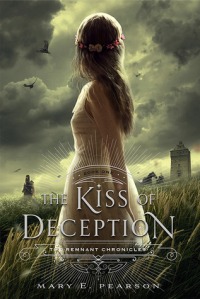 Fiendish by Brenna Yovanoff (Thanks to Penguin First to Read) – Her books look so creepy and this cover just screams “Emily you’re asking for bad dreams!” but it looks awesome and I’ve been craving creepy lately so…

The Kiss of Deception by Mary E. Pearson (Thanks to Henry Holt and Co. (BYR) and NetGalley) – This has been promoted quite a lot and I’m eager to see what it’s all about. I’ve also been craving some good fantasy after my Leigh Bardugo obsession at the moment. I’m a part of #TeamRemnant, the street team for this book, so keep an eye out on my Tumblr the week of it’s release – there will be a bunch of original posts about the book!

A Little Something Different by Sandy Hall (Thanks to Macmillan) – I’m so excited for this one! It’s cover is gorgeous, the story sounds adorable, and it seems to be really unique. I’m hoping to LOVE it. This is also my first ever physical ARC that I’ve requested from a publisher and I got accepted. I did quite the happy dance!

I finished Siege and Storm by Leigh Bardugo and have now moved onto Ruin and Rising! I’m planning to do a double (spoiler-free) review post for the these two, with a Ruin and Rising (spoiler-y) discussion to top it all off! Don’t worry – I’ll hide spoilers so you won’t see them by accident!