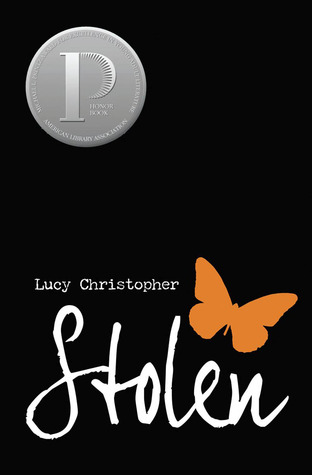 A girl: Gemma, 16, at the airport, on her way to a family vacation.

She steps away. For just a second. He pays for her drink. And drugs it. They talk. Their hands touch. And before Gemma knows what’s happening, Ty takes her. Steals her away. To sand and heat. To emptiness and isolation. To nowhere. And expects her to love him.

Written as a letter from a victim to her captor, STOLEN is Gemma’s desperate story of survival; of how she has to come to terms with her living nightmare–or die trying to fight it.

Stolen was a book that I’d been eyeing for a very long time, as it has been out since 2009, it was brought to my attention on various occasions. I finally caved and bought it after it came highly recommended to my by a friend of mine before she even finished the book. I knew by the way she talked about it that it MUST be good if she was raving about it like she did before she even completed it.

My friend was 100% correct to be talking about this book like she did. Her praise for Stolen was bigger than I’d ever seen over a book she’d read before.

The story that Stolen tells is beautiful, heartfelt, emotional, and gripping. The book would have been amazing on its own, without it’s unique writing style, but Lucy Christopher created a letter from Gemma to her captor shedding light on the characters, their feelings, confusion, and time when they were together.

Stolen was a very intense read, and definitely a life-changing one. It makes you think about how you would act in Gemma’s place, how you would feel toward Ty, and what choice you would make in the end. Tears were continuously flowing from my eyes throughout the book, especially in the end. Since you get to read all of Gemma’s raw feelings toward Ty, you, the reader, ends up just as confused and filled with emotion as Gemma would have been.

All in all, Stolen was dark, gritty, but beautiful all at once. Unlike anything I’ve ever read, it’s a must read.

I was so eager to read more about these characters that I checked out Lucy Christopher’s site as soon as I finished and came across this…I don’t know when this was posted, but I will cling on to the possibility of getting to continue on with their story.