On Saturday I attended TBF Live 2014 – a teen book festival featuring over 20 amazing authors. There were panels, sessions, book sales, raffles, signings and all over fun! This was my third time going to the festival, but my first time as a blogger. I’m super excited to share with you all about it!

Unfortunately, Margaret Stohl and Ann Brashares couldn’t make it due to extreme flight delays, and Lisa Greenwald and Alexandra Coutts were sick and didn’t attend either. Although I was hoping to meet them, it didn’t spoil how awesome the day was!

When I first got there I went straight in for the raffles. Each year they offer a raffle for each winning ticket you get 2 books! I had four winning tickets so of course that means 8 books! All the books up for grabs were old ARCs and most of them were sequels so I only grabbed 5 and let my friend that I went with pick the last three.

About an hour after I got there the Breakout Session with all of the authors started. I didn’t get a seat so I stood towards the back – sorry for the bad pictures.

Each year the opening session is kind of like a game show “hosted” by author Charles Benoit. He’s hilarious and this year the game was “Truth or Talent”. I got a few pictures of some of the authors telling their truth or performing their talent. Some of them were hilarious (Jay Asher, A.S. King, Alethea Kontis, Amber Lough…)!

This session was called the Debut Author Session since each of these authors have just published or are about to publish their first book! It was really interesting learning about the length of the publishing process once you get a deal (about 1 1/2 – 2 years!), where they got their book ideas, etc. I got pictures with Cristin Terrill and Michelle Madow right after but the others were busy talking so I didn’t get the chance until later.

A few of my other friends were volunteering at the fest so we took a longer break than I did last year and had a nice lunch and wandered around a little more looking at books and eating and all around just having fun!

This was the last session so it wasn’t as crowded which was nice. It made for a little more intimate session where she talked a lot about her books, mainly The Winner’s Curse and how she got the idea for it (her friend and auctions!). She talked about all the places she’s lived (Paris, Prague, Boston, NYC!) I would absolutely LOVE to travel to all those places. So cool! I asked her out of all the book-worlds she’s created which one would she want to live in and her answer was Petra’s world (The Cabinet of Wonders series). We ended a little early so I got some bookmarks and a picture with her! 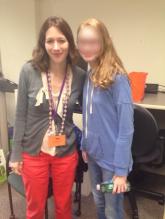 This was probably the thing I was most excited for after the sessions. The lines were soooo long for a ton of the authors, so I didn’t end up getting Laurie Halse Anderson’s signature. She comes every year though so I’ll try for next time! The first author I stopped at was E. Lockhart who I waited for about 45 minutes for and got my copy of We Were Liars signed!

Then I headed over to Michelle Madow and got The Secret Diamond Sisters signed!

Right after that I went to Tess Sharpe, author of Far From You…

I went to Cristin Terrill next and totally fangirled when she remembered me from the first session! She also had a book that she wanted all of US to sign so I did that too!

Marie Rutkoski was next and she remembered me also (again, I fangirled)!

Lastly I went to Alethea Kontis who was dressed in full fairytale princess attire! Her handwriting is beautiful, too! I wish I could write like that!

That was all I had time for – the day flew by and I’m already excited for next year!

It was great getting to meet some of my favorite authors as well as learning more about them! A bunch of them are Shakespearian professors or have fancy degrees in Shakespeare! But most importantly they were all so nice and I loved getting to meet every single one of them! I wish the festival was more than one day so I could see them ALL.

Have you gone to any book events? How was your experience? Let me know in the comments!